As an executive is held captive by an employee, it's up to his wife to deliver the ransom. 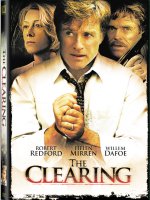 Boasting the years most critically acclaimed and talented cast, including Robert Redford, Hellen Mirren, and William DaFoe, THE CLEARING is a taut, engrossing thriller about fate, love, and missed opportunities.

Wayne (Redford) and Eileen (Mirren) Hayes live the American Dream. Together they've raised two children and struggled to build a successful business from the ground up. But there have been sacrifices along the way. When Wayne is kidnapped by an ordinary man, Arnold Mack (Dafoe), and held for ransom in a remote forest, the couple's world is turned inside out. Eileen finds her home full of FBI agents, their life under scrutiny. While Wayne is engaged in the negotiation of his lifetime, Eileen works frantically with the FBI to secure his release. The terrifying ordeal causes Wayne and Eileen to reassess their marriage and come to a deeper sense of their commitment to each other. With each passing hour, the need and desire for Wayne to return home safely becomes ever more urgent.