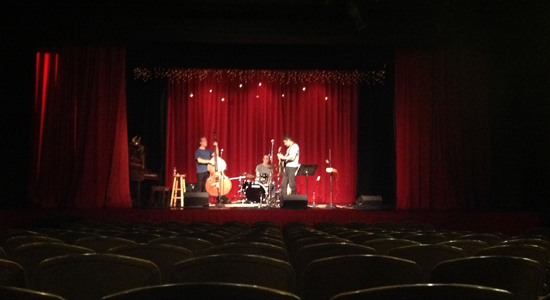 Missed Nick Urata at Largo last night (that's him soundchecking above)? No worries, the DeVotchKa frontman/RUBY SPARKS-composer will be performing at the taping of the CineFamily podcsast tomorrow, where he will speak about scoring the movie. If you're in LA, we highly recommend you check it out.

You can get more info on the event here. From the CineFamily website:

For our inaugural Soundtrack Shelf live taping, were stoked to have as our very first guest Nick Urata, whos not only the leader of gypsy/folk/punk band DeVotchKa, but also the composer of the score to RUBY SPARKS (the new film by LITTLE MISS SUNSHINE directors Jonathan Dayton and Valerie Faris.) Utilizing all his powers as a Grammy-nominated multi-instrumentalist who can personally rock such wide-ranging tools as the theremin, the trumpet and the bouzouki, Uratas film scores are lush sonic buffets where strings, shakers and synths are likely appear in equal unpredictable measure. For the first half of the show, join Nick for DJ sets highlighting some of his favorite moments from the world of film soundtracks, lively discussion about how the music selections have impacted his work, and a look at how he created the score for RUBY SPARKS.

RUBY SPARKS is out now nationwide  click here to find a showtime near you.

Mashable shine a light on our RUBY SPARKS poster contest

Mashable shine a light on our RUBY SPARKS poster contest

Join the Peach Kings at #Sparks In The Park

Join the Peach Kings at #Sparks In The Park

Download an exclusive track from RUBY SPARKS from KCRW.com

Download an exclusive track from RUBY SPARKS from KCRW.com