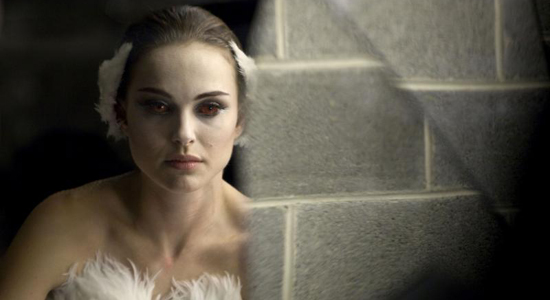 As we rapidly approach D-Day for this year's Academy Awards, we find ourselves emotionally transported back to last year, when we were totally wrapped up in Darren Aronosky's psycho-sexual fantasy thriller, BLACK SWAN. The film was nominated for Best Picture, and Natalie Portman ended up winning Best Actress for her portrayal of ballerina/nutjob Nina Sayers. In case you didn't see the film when it was released in theaters, why not rent or download it as this week's iTunes Movie of the Week?

Suffice to say, BLACK SWAN was very well-recieved by critics, and holds an 87% Fresh score on Rotten Tomatoes. Here's what some critics had to say during the film's release in late 2010:

Lou Lumenick of the New York Post called Portman's performance "swan-derful" (if only we were joking):

Ive given four stars, our highest rating, to four other movies this year. The one Id most gladly watch again  Ive seen it three times  is Darren Aronofskys Black Swan, a delirious fever-dream of a psychosexual thriller starring Natalie Portman as a ballerina descending into madness in far and away the best performance of the year.

Portman's performance is a revelation from this actress who was a 13-year-old charmer in "Beautiful Girls" (1996). She has never played a character this obsessed before, and never faced a greater physical challenge (she prepared by training for 10 months). Somehow she goes over the top and yet stays in character: Even at the extremes, you don't catch her acting.

At the center of it all is Portman. The actress, 29, trained in ballet as a child and drilled hard for nearly a year to master the choreography and do most of her own dancing. Portman's portrait of an artist under siege is unmissable and unforgettable. So is the movie. You won't know what hit you.

During the BLACK SWAN campaign, we debuted I Just Want To Be Perfect, and experience microsite where we unveiled one super short, edgy video loop from the film each day, leading up to its theatrical release. Creepy, right?

Here's the trailer, for those that need a good memory jog. However, if you are in any way familiar with this movie, we're sure these images will stick with you long after the credits have rolled...