iTunes Movie of the Week: Drew Barrymore's WHIP IT (2009) 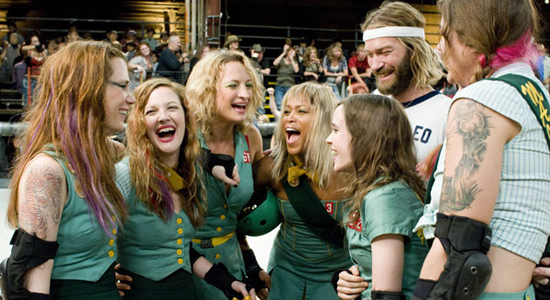 Drew Barrymore has pretty much been an official arbiter of cool since birth, so it makes sense that her directorial debut, WHIP IT, followed suite. The film stars JUNO's Ellen Page as Bliss, a rebellious teenager who decides to ditch the easy path and immerse herself in the rough and tumble world of competitive roller derby. Forging friendships and breaking bones, she goes forth in this new and exciting area. Oh, and Kristen Wiig is hilarious.

The film's screenplay was written by Shauna Cross, a former roller derby athlete turned novelist, whose 2007 young adult novel Derby Girl she adapted into WHIP It. From her Wiki page:

In 2007, Cross's novel Derby Girl, about a teenage girl from a small town who takes up roller derby, was published by Henry Holt and Co. Cross herself was involved in the early days of the TXRD Lonestar Rollergirls league, Cross skated under the pseudonym "Maggie Mayhem" in the Los Angeles Derby Dolls team. She originally did not want to write about her roller derby experiences, but her friends convinced to turn the idea into a fictional story. Although she was primarily a screenwriter, a friend of hers introduced her to her book agent, Steve Malk, who loved the idea. Cross wrote Derby Girl over four months, and Malk sold the manuscript (first titled Derby Doll to Henry Holt after shopping it to various publishers. Cross later remarked that "unlike anything else in my writing career so far, it happened very fast").

After she finished Derby Girl, Cross pitched the same premise as a film to Drew Barrymore's production company, Flower Films. It was picked up immediately after she showed them a script  under the new title Whip It  and Barrymore decided to direct it herself.

WHIP IT is Certified Fresh on Rotten Tomatoes with an 83% score. Here's what some of the critics had to say at the time: 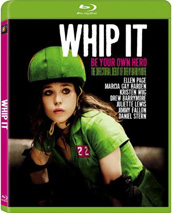 The high-spirited story of an underdog who makes good, Drew Barrymore's "Whip It" looks a lot like your average sports flick. At heart, however, it's that happiest of surprises: a multiplex movie that genuinely respects its young audience.--NY Daily News

It succeeds because of the emotional rather than comic payoffs, such as a late scene between Page and Harden, where daughter and mother, after a rough patch, hit on an unexpectedly serious subject.--Chicago Tribune

Sweet without being sticky and funny without getting silly, "Whip It" introduces Barrymore as a director with a keen eye, a good ear for tone and an inspired touch with actors.--NY Post

The cast is mostly female, the first-time director is Drew Barrymore, and the screenplay comes from Shauna Cross, based on her novel. But the teenage themes are universal: breaking from your parents, discovering yourself and following your bliss.--Newsday

WHIP IT Events Across the Country!

WHIP IT Events Across the Country!