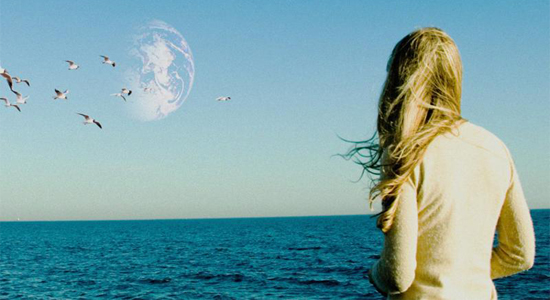 The main crux of ANOTHER EARTH's plot is the idea that anything is possible  the idea that, if there's another planet populated by copies of ourselves, or indeed a multitude of such planets, the resulting combination of actions and consequences could be wonderfully infinite. So infinite, in fact, that maybe we'd be more responsible, well-rounded human beings. Stands to reason, right?

So we took to Twitter to voice our envy over our doppelgangers' supposed better lives, coining the hashtag #OnAnotherEarth in the process. After asking our followers what they would their Other Them was up to all those light years away, we got some interesting answers. Behold:

Unsettling thought: What is Shark Week isn't Shark Week at all #OnAnotherEarth, but Giant Squid Week, of Manatee Week?

(Extra points for a deft SHAUN OF THE DEAD reference)

And then we got called out by Hale & Hearty Soups.

What can we say, Tomato Cheddar is our kryptonite.

Have something to add to the discussion? Check us out at @foxsearchlight and hashtag #OnAnotherEarth!

ANOTHER EARTH to be screened at the World Science Festival

ANOTHER EARTH to be screened at the World Science Festival