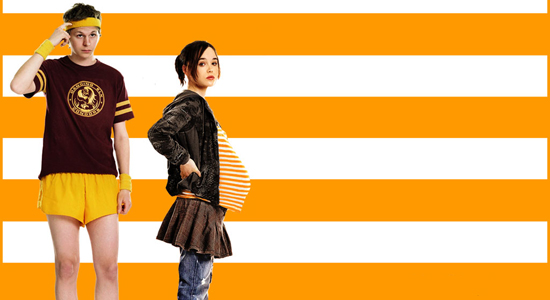 Chances are, if you are a Fox Searchlight fan, you've seen JUNO. It's pretty much a modern teen classic, one of our most popular movies, and won screenwriter Diablo Cody an Oscar. But sometimes, it feels good to revisit one's (albeit recent) younger years. That's why JUNO is our iTunes Movie of the week!

According to Wikipedia, Reitman had and idea of the cast pretty much from the inception of the movie:

Having previously admired her performance in Hard Candy, Reitman cast Ellen Page in the lead role, saying that when he read the screenplay for the first time he pictured her as Juno. He visited her on the set of a film on which she was working to offer her the role. He also handed the script to J.K. Simmons, who had featured in his previous film, Thank You for Smoking, not telling him that he intended Simmons to play Mac. Simmons says that after reading the script, he would have been happy to play even the high school teacher who has no speaking lines. Other cast members Reitman had "in mind right from the start" were Olivia Thirlbywho had originally unsuccessfully auditioned for the role of Junoand Michael Cera. After working with Jason Bateman on The Kingdom, Garner recommended him to Reitman when they first met, and Bateman was cast as Mark, the last cast member to be signed. Lucas McFadden, better known as Cut Chemist, a DJ and record producer, makes a cameo appearance as Juno and Paulie's chemistry teacher. McFadden was doing scoring work for Reitman when he received the Juno screenplay and asked McFadden to appear in the film; Reitman thought that it was "perfect irony" for the chemistry teacher to be played by DJ Cut Chemist.

We can't help but think that casting Cut Chemist is something that Juno herself would have found HILARIOUS. 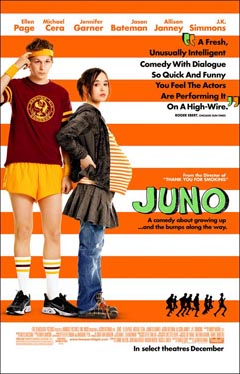 On Rotten Tomatoes, JUNO scored a whopping 93% Fresh reviews, with a golden 100% Fresh reviews among Top Critics. Kind of crazy, right? Here's what some of the critics had to say when it first came out:

"JUNO is this year's LITTLE MISS SUNSHINE, the quirky, unlikely sleeper hit that succeeds not with a cast of millions, or a Brangelina-ish name above the title, or with CGI effects that blast you out of your seat and implant a permanent buzzing sound in your ear, but with a confluence of perfection in every aspect of the film."  David Wiegand, The San Francisco Chronicle

"Thinking of JUNO as just a teenage comedy would be a truly patronizing misstep. Though it centers on the emotional uncertainties of a 16-year-old girl, and though it's laugh-out-loud funny, it's anything but genre-fried hokum. In fact, it transforms an outwardly mundane story line into something extraordinarily affecting."  Desson Thomson, The Washington Post

"JUNO is a coming-of-age movie made with idiosyncratic charm and not a single false note."  David Denby, The New Yorker

"Has there been a better performance this year than Ellen Page's creation of Juno? I don't think so. Page's presence and timing are extraordinary. I have seen her in only two films, she is only 20, and I think she will be one of the great actors of her time."  Roger Ebert, The Chicago Sun Times

And here's JUNO's trailer. Such a simpler time, right?