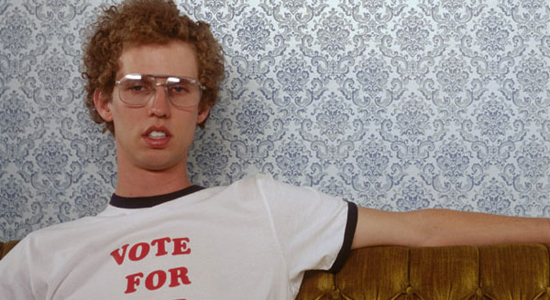 Yesterday, while spending a somewhat lazy Sunday putzing around the house, we decided to have some unintentional laughs by watching Waterworld, Kevin Costner's epic fail of a sci-fi movie from the mid-90s, on cable. While it remains one of our favorite "I'm-bored-so-I-guess-I'll-watch-this" movies (Costner has gills!), we were also reminded that it co-stars a very young Tina Majorino as Enola, the girl with a tattoo of a map to something on her back... it's a long story. Anyway, Tina also plays Deb in the hilarious-on-purpose NAPOLEON DYNAMITE, so we ended up watching that instead of the end of Waterworld. It was a good choice.

NAPOLEON DYNAMITE follows its eponymous hero around his rural Idaho town, perfecting his bowstaff skills, testing time travel apparatus and feeding his grandmother's pet llama while she surfs the dunes on her quad-runner. It's a difficult comedy to describe, as it covers several themes at once: high school, isolation, friendship, family, adversity, and sweet dance moves. So many sweet dance moves.

You probably don't need us to tell you that NAPOLEON DYNAMITE was a runaway hit, and has developed quite a cult following over the years. Here's what some critics had to say about the film when it was released in 2004:

It's a signal irony that a movie shot for $200,000 by a Mormon couple (director Jared Hess and his wife, Jerusha Hess, also the co-writer) in Idaho opens nationally on the same day as Steven Spielberg's $100 million The Terminal and that NAPOLEON DYNAMITE is every inch the superior product. It's tight, resonant, funny as hell, seriously bent and whacked, and also wonderfully healing."Stephen Hunter, The Washington Post

"NAPOLEON DYNAMITE may wear its eccentricity like a fright wig, but in the end it doesn't want to scare us. It wants us feeling warm and fuzzy."Amy Biancolli, Houston Chronicle

Compared with Napoleon Dynamite, other movies about high-school eccentrics - Election and Rushmore, for example - come off as glossy. Napoleon Dynamite succeeds in part because it's unpolished, and we can almost see the haphazard stitching that holds it together."Bill Muller, Arizona Republic

Accodring to the movie's Wikipedia page, there was some confusing with the movie's title concerning international recording artist Elvis Costello.

Upon the film's release, it was noted that the name "Napoleon Dynamite" had originally been used by musician Elvis Costello, most visibly on his 1986 album Blood and Chocolate, although he had used the pseudonym on a single B-side as early as 1982. Filmmaker Jared Hess  claims that he was not aware of Costello's use of the name until two days before the end of shooting, when he was informed by a teenage extra. He later said, "Had I known that name was used by anybody else prior to shooting the whole film, it definitely would have been changed ... I listen to hip-hop, dude. It's a pretty embarrassing coincidence." Hess claims that "Napoleon Dynamite" was the name of a man he met around the year 2000 on the streets of Cicero, Illinois, while doing missionary work for The Church of Jesus Christ of Latter-day Saints.

Maybe the dude on the street was just a really big Costello fan?

And here's the trailer to jog up those warm 'n' fuzzy 2004 feelings: