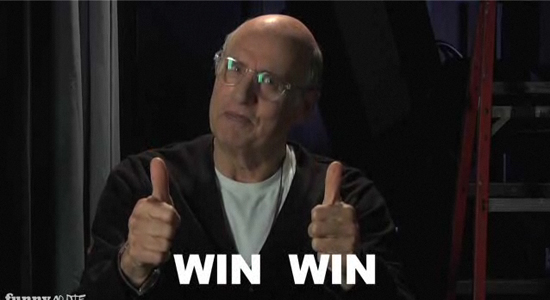 Now that WIN WIN has gone wide (and did we mention it's currently the #5 movie of the year on Rotten Tomatoes?), people have been asking us about the phrase "win-win", and we've realized that people may need a little clarification on what constitutes this fleeting life goal. Luckily, it seems like Jeffrey Tambor (who plays hilarious assistant coach Vigman in the movie) has been having similar issues, and has taken to popular comedy site Funny Or Die to clear some points up.

In this video, Jeffrey explains "win-wins", but also "lose-wins" and the ever-too-present "lose-lose" situation.

Being cast in a movie called Funky Monkey definitely seems like a "lose-lose" to us. Ironically though, the IMDb entry for Funky Monkey lists its plot outline thusly:

Boy genius Michael Dean teams up with a super-talented chimpanzee and his caretaker to take down an animal testing lab. In exchange the scientist gives the boy some pointers on the girl of his dreams.

WIN WIN is out in theaters now, click here for showtimes near you!

We chilled with the WIN WIN cast at Sundance 2011

We chilled with the WIN WIN cast at Sundance 2011