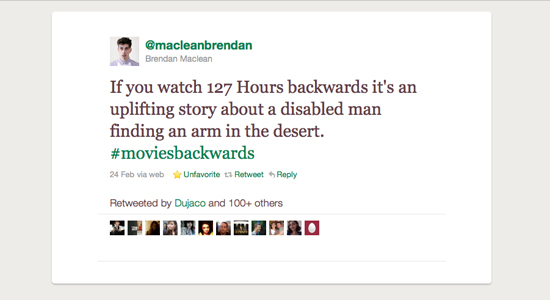 We're not quite sure who first coined this much-RT'd 127 HOURS gag, but @macleanbrendan's tweet was the first one to arrive on our feed so the dubious honor will have to be his, for now. Our only question is: would it still be an epic, uplifting tale or human perseverance? We ask you.

Who knew that this whole time, all Hyde needed to shake his blues was a good laugh at Red's privates. 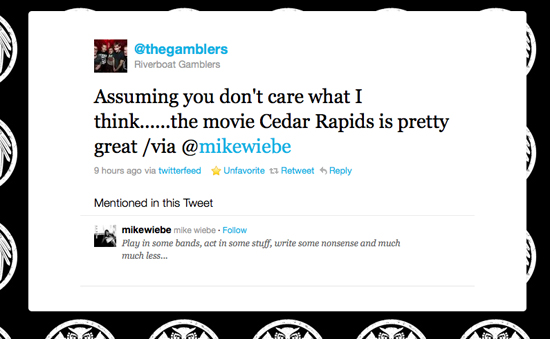 The punk rock 15-year-old in us is super stoked that @mikewiebe from Southwestern cult band The Riverboat Gamblers was into CEDAR RAPIDS. Something about that movie always struck us as somewhat badass (trying new things every day and not giving a damn, the essence of punk), and we're glad to see the Gamblers agree.

We thought @freckledfoxes from last week held the Inside Searchlight record for BLACK SWAN multiple viewings, but turns out she wasn't even close. @kevinalfaiza is up to six... not that it's a contest (it's totally a contest), but we're wondering what next week will bring. Nine? Twelve? Only time will tell. 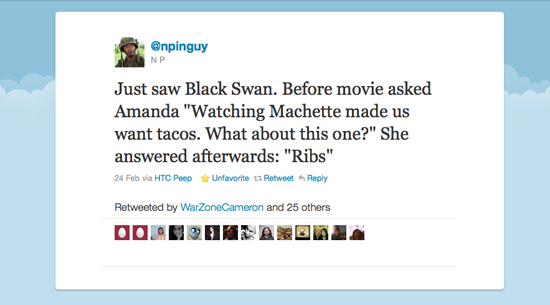 Thanks, @npinguy--now, when faced with a beautiful rack of baby-back BBQ ribs, we're just going to be plagued with visions of nail files and skin rashes. Thanks a lot.

Thus concludes this week's edition of Top Tweets--if you're looking to get in touch with us on Twitter, look no further than @foxsearchlight!