iTunes Movie of the Week: Richard Eyre's NOTES ON A SCANDAL (2006) 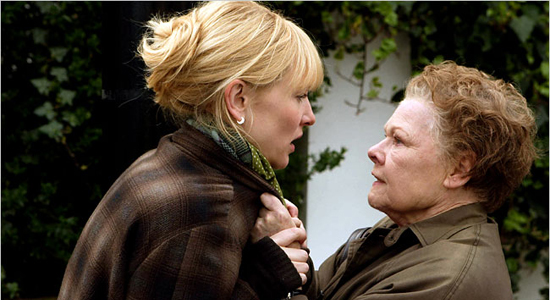 Remember that totally creepy Mary Kay Letourneau case from the '90s when that teacher slept with her 13-year-old student? Now, imagine if she had been trapped in a stately-yet-suffocating marriage with Bill Nighy, and had Judi Dench as a psychotic cat-lady stalker. Creepier? Creepiest. That's essentially the plot of NOTES ON A SCANDAL, Richard Eyre's psychological thriller, and this week's iTunes Movie.

Purchase NOTES ON A SCANDAL Now!

Judi Dench and Cate Blanchette garnered Best Actress and Best Supporting Actress Oscar nominations (respectively) off the back of NOTES ON A SCANDAL, for their portrayal of teacher/diarist/deranged stalker Barbara Covett and the target of her fixations, the not-so-innocent Sheba Hart. The two women duke it out on a psychological battleground worthy of some of film's greatest on-screen rivalries.

The movie scored 87% on Rotten Tomatoes, with a 92% form Top Critics. Here's what some of them had to say:

"Taken at face value, these two women are simply despicable. But the screenplay has a bracing tincture of Grand Guignol, and nothing is simple when the two women are played by a couple of superlative actresses who clearly delight in one another. Cate Blanchett, shot like a visiting angel by the masterful cinematographer Chris Menges, lights Sheba's transgressions

with a flame-thrower's fire, while Judi Dench takes Barbara beyond "Fatal Attraction" into new realms of crinkle-eyed cruelty. And makes her solitude convincingly toxic in the bargain."--Joe Morgenstern, Wall Street Journal

"A tour de force performance by Judi Dench drives the film, but Cate Blanchett and Bill Nighy also are marvelous in powerful, if more restrained, roles. Dench's insistent and sardonic narration is a highlight of the film. [...] The film is a superbly acted and compelling character study of two very different, flawed women. Barbara's delusions also elicit some sympathy: She asserts that she and Sheba "share the ability to see through the quotidian awfulness of things. In a different, better age, we would be ladies of leisure." Notes on a Scandal may be disturbing, but it is a potent and captivating account of misconduct and betrayal"--Claudia Puig, USA Today

"Anyone who loves live-wire acting will gasp in awe at Blanchett, more emotionally exposed than ever, and, most of all, at Dame Judi, whos so electric she makes you quiver."--David Edelstein, New York Magazine

And here's the electrifying trailer: