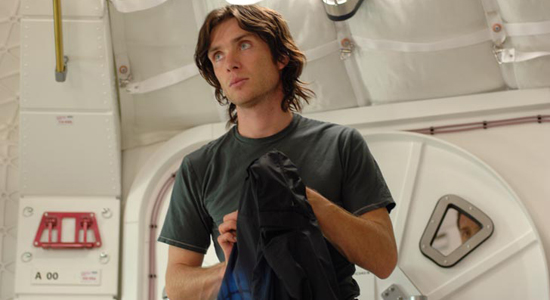 Last night we were chilling on our couch watching Sy-Fy, hoping for an impromptu re-run of Icequake (don't ask) when SUNSHINE came on, as we were reminded that, while our brains have been totally consumed by Danny Boyle's latest film 127 HOURS, there was a time not so long ago when the genre-hopping filmmaker made an understated science fiction drama about a rag-tag group of scientists set out to reignite Earth's dying sun. Ladies and gentlemen, your iTunes Movie of the Week.

Fifty years from now, the sun is dying, and mankind is dying with it. Our last hope: a spaceship and a crew of eight men and women. They carry a device which will breathe new life into the star. But deep into their voyage, out of radio contact with Earth, their mission is starting to unravel. There is an accident, a fatal mistake, and a distress beacon from a spaceship that disappeared seven years earlier. Soon the crew is fighting not only for their lives and their sanity, but for the future of us all.

The visual effects in the movie are stunning--and scientifically accurate, according to SUNSHINE's Wikipedia page:

Cinematographer Alwin H. Kuchler provided an idea to render the interior of the ship in the colours of grey, blue, and green, with no reference to orange, red, or yellow. Scenes were intended to be shot inside the ship at long intervals, and when the shot changed to the outside, yellow-starved audiences would be "penetrated" by sunlight.   The visual effects of the sunlight were based on photographs from the Solar and Heliospheric Observatory project.   Boyle also sought to pursue inexpensive methods in filming sequences involving actors and visual effects. In a scene where Cillian Murphy's character dreams of falling into the sun, the actor was placed in a gantry around which 20 assistants rotated an assembly of bright lights.

In another scene in which a character dies from solar exposure among the ashes from cremated bodies, massive wind turbines propelled biodegradable dust at the actor in the director's attempt to have the computer-generated effects follow the actor instead of vice versa.   Boyle commented on his approach to using effects, "There is part of our brain where we admire the effect, but we put it in a side compartment of our experience because you know there's no way an actor can live through that, or be there in that moment."   During the post-production process, Boyle hired one visual effects company, London's Moving Picture Company, to work on the film's 750 visual effects. The assignment of a single company was contrary to the industry trend of hiring multiple vendors to work on a film's effects. Boyle chose one company for ease of quality control, though the decision resulted in a prolonged post-production process.

Sounds like a lot of work, but definitely paid off in the end.

You can also check out the movie's Rotten Tomatoes page (where it scored a more-than-respectable 74%). Excerpts:

"Every frame wows with exquisite arrangements of light and color; each of the characters' choices is packed with a sense of consequence and urgency that makes us feel as if we're frittering away our lives by comparison"--Jan Stewart, Newsday

"This is Sci-fi at its proudest; an incredible achievement that reminds us why Danny Boyle is the best British director working today.--John Utichi, Film Forum

Imagining the universe through one man's eyes, the movie uses Murphy's brilliant blue eyes and seductive androgyny to set a starting point, both luminous and uncanny. From here, Sunshine suggests vision is ever mutable."--Cynthia Fuchs, Philadelphia City Paper

And here's the trailer, in all it's spooky sci-fi glory:

SUNSHINE - NO ONE SURVIVES: Not The Physicist

SUNSHINE - NO ONE SURVIVES: Not The Physicist