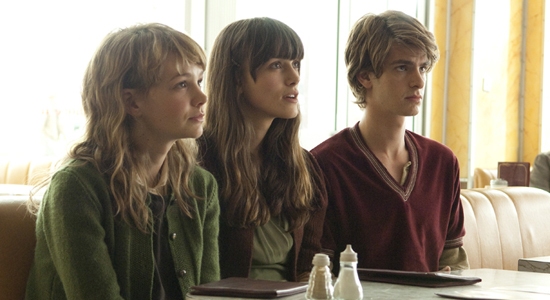 NEVER LET ME GO continues to pick up speed this Awards Season...

David Poland of Movie City News put NEVER LET ME GO on the top of his best of 2010 list, saying:

Romanek creates a world of isolation in which these children and then young adults live and know little about any other kind of life. Its a mostly beautiful world, however ugly the human truth that is so rarely spoken of. Romaneks vision floats through periods, never quite settling on any one, maintaining the universality reflections of socialism, fascism, capitalism, religion, and all the other excuses we make to forget the humanity of others.

Karen Durbin over at the New York Times added the movie to her "Movies Worth Another Look" column, calling it once of the best wrongly-overlooked film of the year:

Like the best science fiction Never Let Me Go shines its strongest light on the present. It isnt simply that the traffic in human organs has become just another lucrative global transaction, or that in some families here and elsewhere children are being born to serve as blood banks and beyond for chronically ill siblings. While the movie focuses on the insular world of its naïve central characters, Mr. Romanek skillfully seeds the narrative with hints  say, a teachers fleeting mention of factory farms replacing the schools  at a society growing harsher and more selfish by the day. One of the pleasures of Never Let Me Go is its beauty, but the mirror it invites us to look into could hardly be more unsparing.

Powerful stuff, for real. Keep your eyes peeled for more NLMG news as we delve deeper and deeper into Awards Season--and if you want to keep track of all the movie's awards activity, check out our Tally Post here.