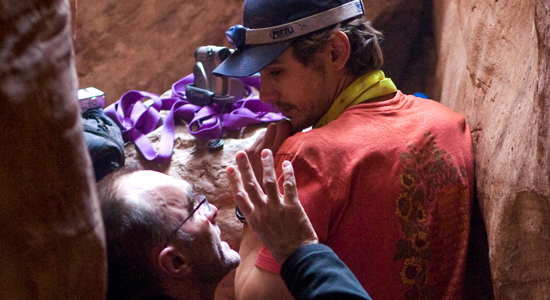 If you've seen 127 HOURS, you'll probably remember the rather intense emotional bond Aron develops with his Nalgene water bottle, as it becomes his literal lifeline while trapped. In response to the film, Nalgene have released their own limited edition 127 HOURS bottle, and are giving fans the chance to win their own... signed by James Franco!

All you have to do is go to the Nalgene Facebook Page and give them your best story involving a Nalgene bottle--there are already quite a few interesting ones, so make sure to submit yours... though, the contest runs until Dec. 22nd, so you know, you don't have to rush or anything.

127 HOURS is in theaters now--if you've yet to see it, feel free to check out our Release Post and find out where the film is playing near you.