iTunes Movie Of the Week: Jim Sheridan's IN AMERICA (2003) 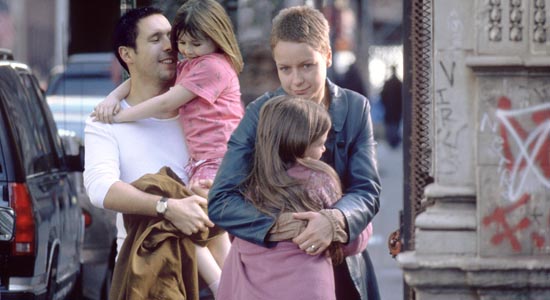 IN AMERICA was directed by Jim Sheridan. The semi-autobiographical screenplay by Sheridan and daughters Naomi and Kirsten focuses on an immigrant Irish family's efforts to survive in New York City, as seen through the eyes of the elder daughter. The film was nominated for three Academy Awards: "Best Original Screenplay" for Sheridan, "Best Actress" for Samantha Morton and "Best Supporting Actor" for Djimon Hounsou.

Intimately told by their 11-year-old daughter Christy (Sarah Bolger), a child wise beyond her years, is a coming of age story about an Irish couple (Samantha Morton, Paddy Considine) trying to find their way IN AMERICA. To Christy and her younger sister Ariel (played by real life sister Emma Bolger), America is a place of magic where anything is possible. To their parents, it represents a place to begin anew. Carried by the girls youthful hope and faith, the family finds the heart to live and love again. Together they find home.

Helmed by Jim Sheridan (BROTHERS, MY LEFT FOOT, IN THE NAME OF THE FATHER) whose previous films have won two Academy Awards® and received a total of 13 Oscar® nominations, IN AMERICA is a 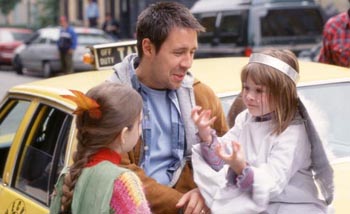 semi-autobiographical story written by Sheridan and his filmmaker daughters Naomi and Kirsten Sheridan. The film is produced by Sheridan and his long-time partner Arthur Lappin, with whom he collaborated on MY LEFT FOOT, IN THE NAME OF THE FATHER, THE BOXER and THE FIELD.

Wikipedia on the Film's Production:

"The film is dedicated to director/screenwriter Jim Sheridan's brother Frankie, who died at the age of ten. In The Making of In America, a featurette on the DVD release of the film, Sheridan explains Christy and Ariel are based on his daughters (and co-writers) Naomi and Kirsten. He says they wanted to make a film showing how people can learn to overcome their pain and live for the future instead of dwelling on the sadness of the past."

Excerpts From Reviews (via Rotten Tomatoes, where it scored 89% overall - 93% among top critics) 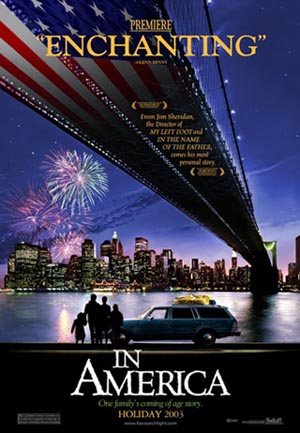 "Grade A. This is a tearjerker for all the right reasons... I loved this unassuming, heartfelt little gem, even if I couldn't stop sobbing for an hour after the show. It's just so beautiful."
- St. Petersburg Times, Steve Persall

"A wondrously emotional film, one that sneakily dismantles your defenses and purges grief you didn't realize you had."
 Carrie Rickey, Philadelphia Inquirer

"A big little movie, a fictionalized memoir that transcends the personal to become universal - its grubby verve touched with a sense of wonder and magic, its mundane actions given an all-too-rare spiritual resonance."
 Michael O'Sullivan, Washington Post