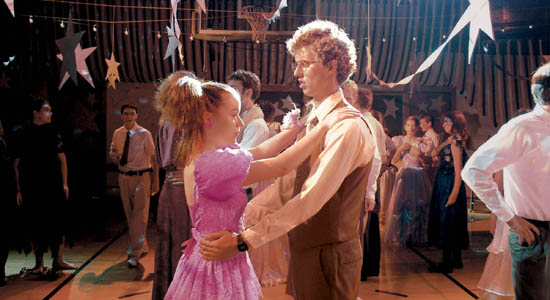 NAPOLEON DYNAMITE was co-written and directed by Jared and Jerusha Hess (both in their early twenties at the time) and stars Jon Heder as Napoleon, Heder's first role in a feature film. The movie was also Jared Hess's first full-length feature film, and it was partially adapted from his short, PELUCA. NAPOLEON was filmed in and around Preston, Idaho in 2003. It debuted at Sundance in January 2004 and first opened in theatres in June 2004.

From Preston, Idaho comes Napoleon Dynamite (Jon Heder), a new kind of hero complete with a tight red 'fro, some choice moon boots, and skills that can't be topped. Napoleon spends his days drawing mythical beasts, duking it out with his 32-year-old brother Kip (Aaron Ruell) and avoiding his Uncle Rico (Jon Gries), a door-to-door salesman who's mentally stuck in 1982 - the year his football team "almost won state." But when two new friends are brought into his life - Deb (Tina Majorino), the artisan behind the "boondoggle key chain," and Pedro (Efren Ramirez) with his sweet bike and talent with the chicks - Napoleon finds goals outside of being a star milk-tasting judge. Together the trio launches a campaign to elect Pedro for class president and make the student body's wildest dreams come true. But if Pedro is to beat stuck-up Summer (Haylie Duff), Napoleon will have to unleash his secret weapon... Visit the film's official site and watch the trailer at the bottom of this post.

"Preston is a real town in southeastern Idaho, located near the Utah border. Since the release of Napoleon Dynamite, it has become a tourist attraction of sorts, with Preston High School  being a main feature. Also with its premiere in 2004, Preston has held a

Napoleon Dynamite Festival every summer to celebrate the filming of in Preston and nearby towns..."

"In April 2010 it was revealed that an animated series was in the works. Much of the original cast has agreed to reprise their roles. This includes Jon Heder as Napoleon Dynamite, Efran Ramirez as Pedro, Aaron Ruell as Kip Dynamite and Jon Gries as Uncle Rico. Director Jared Hess and his co-screenwriter wife Jerusha are also closely involved."

Some "Sweet" Quotes (More on IMDB)

Don: "Hey, Napoleon. What did you do last summer again?"
Napoleon: "I told you! I spent it with my uncle in Alaska hunting wolverines!"
Don: "Did you shoot any?"
Napoleon: "Yes, like 50 of 'em! They kept trying to attack my cousins, what the heck would you do in a situation like that?"
Don: "What kind of gun did you use?"
Napoleon: "A freakin' 12-gauge, what do you think?"

Napoleon: "[A liger is] pretty much my favorite animal. It's like a lion and a tiger mixed ... bred for its skills in magic."

Napoleon: "Do the chickens have large talons?"
Farmer: "Do they have what?"
Napoleon: "Large talons."
Farmer: "I don't understand a word you just said."

Excerpts From Reviews (via Rotten Tomatoes) 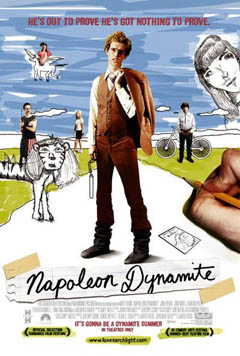 "The funniest film of the summer."
-- Roger Moore, Orlando Sentinel

"One of the most winning movie creations in years."
-- Stephen Hunter, Washington Post

"A little movie with a lot of heart and a lot of laughs."
-- Lou Lumenick, New York Post

"I'm cracking up already thinking about that uncle again, who is obsessed with 1982."
-- Richard Roeper, Ebert & Roeper