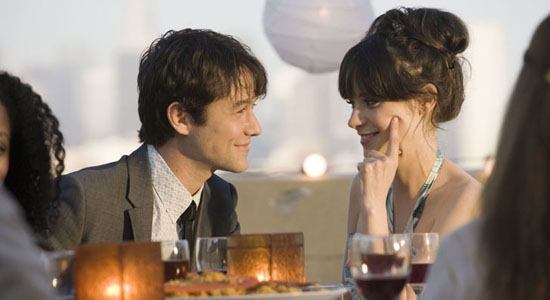 (500) DAYS OF SUMMER marked the feature directorial debut of Marc Webb and starred Joseph Gordon-Levitt and Zooey Deschanel. It was a hit at Sundance in 2009, receiving a standing ovation at its premiere screening, and it was lauded by many critics as one of the best films of the year. (500) DAYS received numerous awards and nominations, including the Independent Spirit Award for "Best Screenplay" for writers Scott Neustadter and Michael H. Weber and Golden Globe noms for "Best Picture (Musical or Comedy)," and "Best Actor (Musical or Comedy)" for Gordon-Levitt. The film first opened in theatres on July 17, 2009.

This is a story of boy meets girl, begins the wry, probing narrator of (500) DAYS OF SUMMER, and with that the film takes off at breakneck speed into a funny, true-to-life and unique dissection of the unruly and unpredictable year-and-a-half of one young man's no-holds-barred love affair.

Tom, the boy, still believes, even in this cynical modern world, in the notion of a transforming, cosmically destined, lightning-strikes-once kind of love. Summer, the girl, doesn't. Not at all. But that doesn't stop Tom from going after her, again and again, like a modern Don Quixote, with all his might and courage. Suddenly, Tom is in love not just with a lovely, witty, intelligent woman  not that he minds any of that -- but with the very idea of Summer, the very idea of a love that still has the power to shock the heart and stop the world. (Read the rest of the synopsis.)

(500) DAYS OF SUMMER inspired school film projects, marriage proposals and car commercials, not to mention inventive remixes of the trailer, as seen at the bottom of this post (recut to incorporate music from the upcoming INCEPTION). Zooey, Joseph and Marc made both a dance video and a reinterpretation of a SID AND NANCY; Webb and "the boys" shot flipcam video of a wild night on the town and Searchlight produced a huge array of behind-the-scenes videos - now featured on the film's official site and under the (500) DAYS OF SUMMER tag on FoxSearchlight.com. You can watch the trailer below.

Excerpts from the overwhelmingly positive reviews are below and can be accessed in their entirety via Rotten Tomatoes. 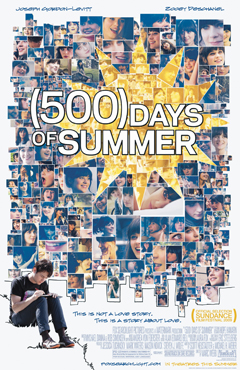 "A delightful comedy, alive with invention... In romance, we believe what we want to believe. That's the reason (500) DAYS OF SUMMER is so appealing."
-- Roger Ebert, Chicago Sun-Times

"Much like ANNIE HALL did for a previous generation, (500) DAYS OF SUMMER may be the movie that best captures a contemporary romantic sensibility."
-- Claudia Puig, USA Today

"Finally, a romance that understands we mark our lives by our scrapes with love, and our defeats, rather than simply white-wedding-cake success."
-- Desson Thomson, The Washington Post

"I loved this movie. One of my favorite movies of the year so far. It was so great."
-- Bill Zwecker, Chicago Sun-Times

"Thanks to two wonderful, offbeat performances by Joseph Gordon-Levitt and Zooey Deschanel, this movie has charm to spare.  It looks right in your eye and tells the truth."
-- Rex Reed, New York Observer

BELOW: The Official Trailer for (500) DAYS OF SUMMER

BELOW: New Spoof Trailer Recut to Music From INCEPTION