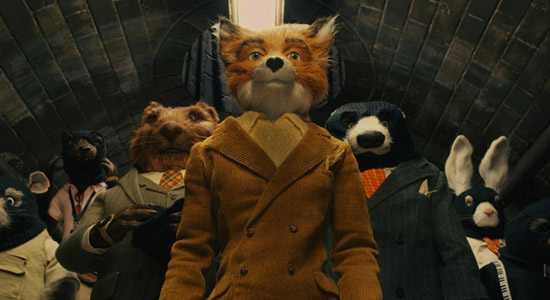 Packed with behind-the-scenes bonus features - including a special inside look at how stop-motion animation really works and much more - FANTASTIC MR. FOX is now available as a Blu-ray Disc/DVD Combo Pack (Blu-ray, DVD and a Digital Copy) and standard DVD and can be downloaded from iTunes. Click here for the deets!

Buy It On DVD or Blu-ray

Mr. and Mrs. Fox (Clooney and Streep) live an idyllic home life with their son Ash (Schwartzman) and visiting young nephew Kristofferson (Eric Anderson).  But after twelve years of quiet domesticity, the bucolic existence proves too much for Mr. Foxs wild animal instincts.  Soon he slips back into his old ways as a sneaky chicken thief and in doing so, endangers not only his beloved family, but the whole animal community. Trapped underground without enough food to go around, the animals band together to fight against the evil Farmers - Boggis, Bunce and Bean - who are determined to capture the audacious, fantastic Mr. Fox at any cost.  In the end, he uses his natural instincts to save his family and friends.

You can check out all our blog posts about MR. FOX (and much, much more) at the film's official Web page, or by looking under the FANTASTIC MR. FOX tag on FoxSearchlight.com.