(500) DAYS OF SUMMER Is Bringing People Together. As In Holy Matrimony. 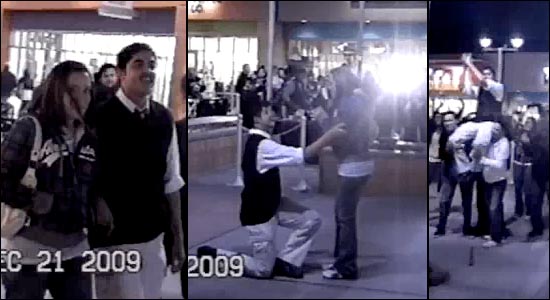 So I promise this is the last time I post a video playing Hall & Oates' "You Make My Dreams Come True."

Yes, we've posted the (500) DAYS OF SUMMER scene itself, a split-screen/making-of sequence, and video from a very talented group of high schoolers re-enacting said scene, with their own special twist.

However, you'll see why this last video needed to round out the collection: someone actually re-enacted the dance scene (which I'll admit is easily my favorite (500) DAYS scene too) while proposing marriage. Now that's dedication. (And. happily, she said yes.) Big congrats to the bride- (Stephanie) and groom-to-be (Ricky) and a tip of the hat to Mr. Fiance for his creativity.

"My proposal to my beautiful fiancee Stephanie! I decided to do this 4 days before the actual proposal and we had 1 hour of practice the day before. I want to say thank you to my family and friends for helping me out. Especially those in the fast-track nursing program class of 2010 who had just finished a final exam this same day. You're all awesome and thanks for making our proposal unforgettable."