It's a SLUMDOG MILLIONAIRE World!

It's a SLUMDOG MILLIONAIRE World!

Below is just a tiny - and I mean TINY - sampling of what's available right now of online articles, videos and photos about the little film that won "Best Picture" and seven other statues at the Academy Awards® on Sunday night. Enjoy...

"The child stars of the Oscar®-winning "Slumdog Millionaire" returned to India on Thursday to a chaotic but rousing heroes' welcome. Hundreds of well-wishers waited for them at the Mumbai airport, where dozens of police, some heavily armed, were needed to escort the children through the cheering crowds." (Watch video of their arrival below! Plus, read a similar article by Reuters.)

Okay, the pun is cheesy, but the video of the kids from SLUMDOG MILLIONAIRE having the time of their lives at the Santa Monica Pier in California following their movie's Oscar® win is pretty adorable... Watch the video!

The Telegraph: "SLUMDOG Star to Appear On Millionaire Game Show'"

"Dev Patel, the star of Oscar®-winning British film 'Slumdog Millionaire,' is going on the real 'Who Wants to be a Millionaire?' quiz show to raise money for street children." Be sure to watch the accompanying video of Dev below! 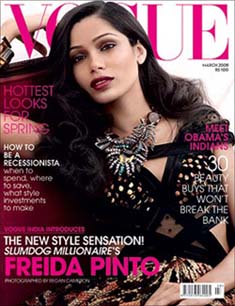 Pinto, 24, who was signed on by Hollywood filmmaker Woody Allen, posed for the cover of Vogue's March issue. The magazine, which hits stands today, features exclusive interviews about life before the Oscars®, bonding with Oprah Winfrey, Leonardo DiCaprio and her future plans.

"President Obama may not be delivering a State of the Union tonight, but he's adhering to one apparently unshakable SOTU tradition: lunching with the anchors. The purpose, of course, was to spin -- or guide -- the journalistic guests on the speech to Congress. But one participant tells me the president began by talking about 'Slumdog Millionaire,' the India-based film that cleaned up at the Oscars. Obama said the movie reminded him of the years he spent in Indonesia."

"There were plenty of questions and photos for many of the [Oscar] winners, including a few who were up past their bedtimes. The kids from 'Slumdog Millionaire,' flown in just a few days before from India, moved as a posse, and the director Danny Boyle placed the statue on Azharuddin Mohammed Ismails head for one photo and took turns holding it with the others. He said that although he had managed the children on screen, 'I am not going to be the one to tell them its time to go to bed.'"

And Don't Miss the Three Videos Below...

Below: "The Young Cast Of SLUMDOG MILLIONAIRE Melts Our Cynical Hearts: MTV'com's Josh Horowitz Meets the Rookie Stars On the Oscar Red Carpet."

Below: The SLUMDOG Kids Receive a Hero's Welcome Back Home In India.

Below: Dev Patel on the craziness of his life right now (From The Telegraph)

VIDEO: SLUMDOG's Dev and Freida On The Today Show!

VIDEO: SLUMDOG's Dev and Freida On The Today Show!