Want To Have Your Name In Chuck's Next Book?

Want To Have Your Name
In Chuck's Next Book?

The below is from ChuckPalahniuk.net, the official Web site for author Chuck Palahniuk and host of the contest. Read on to learn how to get involved!

Want to get a character named after you in Chuck Palahniuk's next book? All you have to do is get as many people as you possibly can to go see CHOKE this weekend.

Is this for real? You damn well bet it is. Clark Gregg and I got on the phone yesterday and decided that we needed to hit the ball out of the park this weekend with the box office numbers on CHOKE. You see, Hollywood does math a lot differently than you and I do. And we are, right now, in one of the most crowded seasons for the movie market. Last weekend, CHOKE opened against an $80 million dollar movie produced by Stephen Speilberg on a night when most of America was watching Barack Obama debate John McCain on almost every news channel on TV. And this weekend, CHOKE enters its second weekend on the three days when, according to Variety, "A whopping seven wide releases" hit the theaters, making it one of the worst bottlenecks for new releases in recent memory.

What does this mean for CHOKE? It means if CHOKE doesn't at least crack the top ten in this upcoming weekend's box office, it's chances for being around much longer are slim. What's sad is, CHOKE is competing against movies that opened up in over four times as many theaters. But it's still averaging better than most on a per theater basis! Why? Because it's a great film! And it's one that needs our support! And dammit, that's what we're gonna do!

We need everyone reading this post right now to go see CHOKE this weekend. But before you do, we need you to email this post to everyone you know. Contact everyone in your address book. Everyone you work with. All of your family and extended family. Everyone on your MySpace page. Your Facebook page. EVERYONE!!!

If you've already seen it, go see it again. If it's more than 50 miles away from where you live, leave enough time for the drive. If it's out of state, make it your day.

The person who gets the most people to go, gets a character named after them in Chuck's next book. Yes, this is for real. Clark and I spoke to Chuck on the phone yesterday, and he's completely on board with this.

People who do the organizing will be considered Team Commanders... or, as Clark Gregg will be calling you, Lord High (insert name here). Everyone you convince to go also wins. Fox Searchlight will be sending you an official and limited edition CHOKE T-shirt. So again, everyone in the winning team gets something.

How do you prove to us how many people you convinced to go? Well, as a Team Commander, you're in charge of getting the proof from all of your team. That means, everyone you convince to go has to:

This contest is only eligible for the upcoming weekend of Friday October 3rd, through Sunday October 5th. So it begins midnight leading into Friday, and concludes with the last show of your local theater on Sunday night. Therefore, the dates on the ticket stub have to coincide with this date range.... for you and everyone you get to go.

The people you convince to go do not have to attend the movie with you. They can be in any state. They can even be in Canada. But only one Team Commander wins the ultimate prize. So teaming up with other Commanders won't get you anything. Everyone who decides to organize and lead has to get their own people to their theaters. 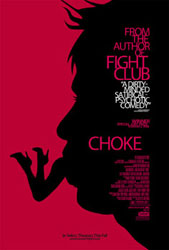 Now, we recognize that there may be some horrible people reading this, who will be so blood thirsty to get their name in a Chuck Palahniuk novel, that they'll think of ways to scam us so that they win. We thought about this long and hard, and we don't have any definitive way to make sure everyone is honest. So all we're asking is, to search your heart and please try and follow an honor code.

Any sort of box office success or minor victory for CHOKE has deep, deep implications for your futures as Chuck Palahniuk fans. As Clark put it so wonderfully in his blog:

"If the Army shows up in force tonight or Sunday, maybe it won't take another seven years to see the movie of 'Survivor.'"

It's more than that though. Don't forget that "Fight Club" came out in 1999. Immediately after that, most of Chuck's books were optioned for movie adaptations. Yet it took nine years before we were to see another one hit theaters. Right now, most of Chuck's ten books are optioned, with filmmakers eager to make them. But the people holding the money purses are also the ones holding the strings. So a lot is riding on CHOKE.

So let's go out and kick ass this weekend. And it HAS TO BE THIS WEEKEND. Because with the movie market as crowded as it is, CHOKE may very well not be around for a third.

Start contacting everyone you know. Contact movie sites you know that may want to post this story. Blog about it. Tell people in your town about it. Remember, you as the Team Commander has a chance to have your name in Chuck's next book! And everyone on your winning team gets an awesome T-shirt.

But the real prize here is what we'd be doing for Chuck. So let's go repay the guy for all the great stories he's given us. Let's show him that we want to see more of those stories on the big screen. Let's organize. Let's mount up. And let's kick ass this weekend.

CHOKE Is Now Playing In Theatres

"You Touched My Woo Woo!"

"You Touched My Woo Woo!"