A sex-addicted med-school dropout keeps his increasingly deranged mother in an expensive private hospital by working days as a historical reenactor. 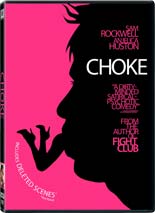 Buy It On DVD Or Blu-ray

Actor-turned-director Clark Gregg shows he is as adept behind the camera as he is in front of it with CHOKE, a wickedly colorful dark comedy about mothers and sons, sexual compulsion, and the sordid underbelly of Colonial theme parks. Victor Mancini (Rockwell), a sex-addicted med-school dropout, who keeps his increasingly deranged mother, Ida (Huston), in an expensive private medical hospital by playing an Irish indentured servant in a colonial-era theme park. At night Victor runs a scam by deliberately choking in upscale restaurants to form parasitic relationships with the wealthy patrons who save him. When, in a rare lucid movement, Ida reveals that she has withheld the shocking truth of his fathers identity, Victor enlists the aid of his best friend, Denny (Henke) and his mothers beautiful attending physician, Dr. Paige Marshall (Macdonald), to solve the mystery before the truth of his possibly divine parentage is lost forever.