A woman spirals out of control while trying to keep her son from being found culpable in a murder investigation. 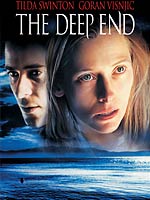 An unflinchingly devoted mother's act to protect her son becomes both a riveting cat-and-mouse game and a haunting love story of self sacrifice.

In the comfort of a seemingly ordinary life, Tilda Swinton brings to the fore a sense of isolation as Margaret Hall, a lonely Lake Tahoe housewife whose naval officer husband spends months at sea on an aircraft carrier. In his absence, Margaret does her best to do right by her family, no matter what. Margaret's routine has always included solving

one emergency after another with quick decision. So when her eldest son Beau's lover washers up on the beach in front of their house, she does the only thing an unflinchingly devoted mother could: she hides the body to protect her son. Unexpectedly, in the aftermath of this desperate act, emerges Alek Spera (Goran Visnjic), who knows about the death, and about the secret life of her son. What begins as a riveting cat-and-mouse game soon turns into a haunting love story with self-sacrifice at its center. As Margaret attempts to dodge blackmail, the law, and even the questions of her family, she herself becomes exposed.