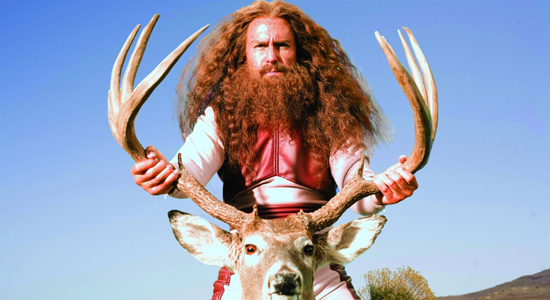 Before playing Freddie Highmore's suave artist mentor Dustin in Gavin Wiesen's THE ART OF GETTING BY (out nationally now), Michael Angarano starred in another Fox Searchlight picture: Jared Hess' GENTLEMEN BRONCOS. You may remember Jared from directing, oh, NAPOLEON DYNAMITE, and launching a million "gosh!"'s and "dangit!"'s in the process. Far from a Nap D rehash, BRONCOS is a downright surrealist tale of an aspiring sci-fi writer and his battle of the wills with an established (and deranged) fantasy author.

Benjamin (Michael Angarano), home-schooled by his eccentric mother (Jennifer Coolidge), is a lovable loner whose passion for writing leads him on an offbeat and hilarious journey as his story first gets ripped off by the legendary fantasy novelist, Ronald Chevalier (Jemaine Clement) and then is adapted into a disastrous movie by the small town's most prolific homespun filmmaker.

In the movie, Jemaine Clement, one of the two comedic masterminds behind Flight of the Conchords, plays Dr. Ronald Chevalier, a world-renowned fantasy author with big hair and an even bigger ego. Before the film's release, Searchlight orchestrated a viral campaign featuring Dr. Chevalier in all his glory. Still definitely worth a gander:

And the best one, and actual Ronald Chevalier reading oh his latest sci-fi epic. Truly inspiring. And here's the trailer: