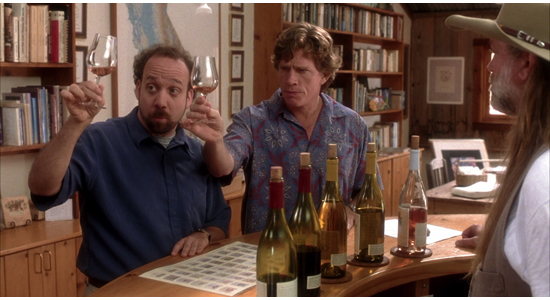 With Paul Giamatti garnering rave reviews for his performance in WIN WIN, and Alexander Payne's new film THE DESCENDANTS coming out on Searchlight at the end of this year (not to mention his role in producing Miguel Arteta's CEDAR RAPIDS), it seems like the perfect time to revisit Mr. Payne's 2004 ode to wine and middle-age, SIDEWAYS.

SIDEWAYS is the story of Miles (Paul Giamatti) and Jack (Thomas Hayden Church, in an Academy Award-nominated role) who embark on a wine-tasting road trip across California to blow off some steam before Jack's big wedding. Old college buddies, Jack and Miles couldn't be different: Jack is a charming womanizer out for one last shot at freedom, whereas Miles is a dawdling writer/English teacher obsessed with his unpublishable his novel, and his own anxiety. What starts off as a jolly romp between the two swiftly transforms into a revealing mishmash of ridiculous situations, beautiful women, and drunken last grasps at their fading youths. You'll laugh, you'll commiserate, you'll kind of feel bad for them, but you'll definitely watch it again and again.

SIDEWAYS has scored  a ridiculously stellar 97% on Rotten Tomatoes. The film was a smashing success for Alexander Payne and the cast, winning the Academy Award for Best Screenplay (Adapted) and the Golden Globes for Best Picture (Comedy or Musical) and Best Screenplay, while netting Academy Award nominations for both Thomas Hayden Church and Virginia Madsen.

Here's what some critics had to say at the time of the film's release:

"There's not a false note here, and the entire supporting cast -- Madsen, Oh, Church and Marylouise Burke as Miles's Mother -- is uniformly excellent. It rambles along at its own good-natured pace, playing both for laughs and for laments."Teresa Wiltz, The Washington Post

"Alexander Payne finds plots that service his characters, instead of limiting them. The characters are played not by the first actors you would think of casting, but by actors who will prevent you from ever being able to imagine anyone else in their roles."Roger Ebert, The Chicago Sun-Times

"SIDEWAYS is by far the year's best American movie. It's vigorous, gracious, tenderly attentive to Miles' and Jack's immense flaws  a paean to the durability of life's losers, which is to say most of us. This sunny, funny trip of a film would stamp a 2-hr. smile even on Miles' forlorn face."Richard Corliss, TIME Magazine

"Sideways is quasi-Chekhovian in the moving vitality of its ever-hopeful prisoners exploring their lost aspirations. It could turn out to be the best English-language picture of the year."Andrew Sarris, The New York Observer

"Sideways" is a wonderful film, so accomplished that it looks effortless. In his fourth feature, Payne has refined his simple but eloquent style to the point where it serves the material fully without an ounce of ostentation."Todd McCarthy, Variety

Also, according to the film's Wikipedia page, SIDEWAYS' acclaim actually impacted Merlot and Pinot Noir sales the year of its release:

Throughout the film, Miles speaks fondly of the red wine varietal Pinot noir, while denigrating Merlot. Following the film's U.S. release in October 2004, Merlot sales dropped 2% while Pinot noir sales increased 16% in the Western United States. A similar trend occurred in British wine outlets. Sales of Merlot dropped after the film's release possibly due to Miles' disparaging remarks about the varietal in the film. However, sales of Merlot in the United States remain more than double those of Pinot noir, the country's second most popular wine.

Actually, we'd be lying if we said we've never quoted the phrase "If anyone orders Merlot, I'm LEAVING!" at several dinners in the past.