iTunes Movie of the Week: Jason Reitman's THANK YOU FOR SMOKING (2005) 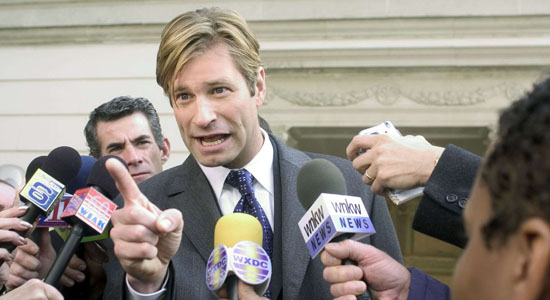 Before reaching new heights of critical acclaim with UP IN THE AIR and our very own JUNO, director Jason Reitman released the equally lauded THANK YOU FOR SMOKING, starring Aaron Eckhart as a somewhat morally bankrupt Big Tobacco spokesperson. It's funny, shocking, and slightly nauseating, and it's this week's iTunes Movie of the Week!

PURCHASE THANK YOU FOR SMOKING NOW!

THANK YOU FOR SMOKING has a more-than-respectable 85% score on Rotten Tomatoes. Here's what some top critics were saying at the time:

"What I admired above all in THANK YOU FOR SMOKING was its style. I enjoyed the satire; I laughed a lot because it's a very funny movie, but laughs are common and satire, as we all know, is what closes on "Saturday Night Live." Style is something modern movies can't always find the time for."--Roger Ebert, The Chicago Sun Times

"The ridiculously entertaining satire THANK YOU FOR SMOKING, like [the film's] protagonist, is smart, glib, and utterly charming -- just the thing to warm up a movie season that's been late to bloom."--Ty Burr, The Boston Globe

"Strange as it may seem, the movie itself plays out as a sparkling reverse-psychology satire, written, directed and acted on a level of wit and verve, that is, unprecedented as far as this years crop of American movies is concerned."--Andrew Sarris, The New York Observer

"Aaron Eckhart is so good in his performance. Everybody's terrific. The writing is funny. And the directing is top-notch."--Richard Roeper, Ebert & Roeper

Check out the film's trailer below: