iTunes Movie Of the Week: Jason Reitman's THANK YOU FOR SMOKING (2006) 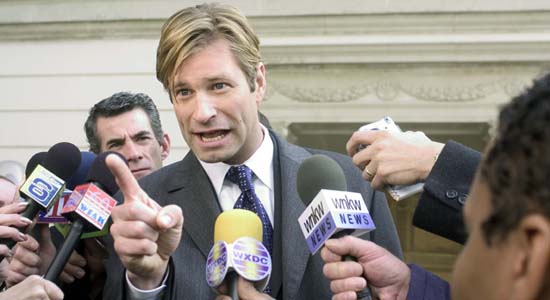 THANK YOU FOR SMOKING marked Jason Reitman's directorial debut, ultimately followed by his Oscar-winning JUNO and Oscar-nominated UP IN THE AIR. It was based on the 1994 novel by Christopher Buckley. The film was first released in theatres March 17, 2006 and stars a huge cast, including Aaron Eckhart, Maria Bello, Cameron Bright, Adam Brody, Sam Elliott, Katie Holmes, David Koechner, Rob Lowe, William H. Macy, JK Simmons and Robert Duvall.

Purchase THANK YOU FOR SMOKING Now 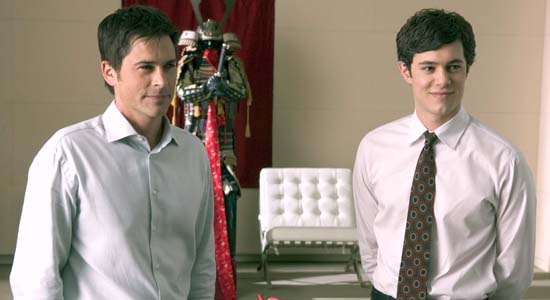 Excerpts From Reviews (via Metacritic) 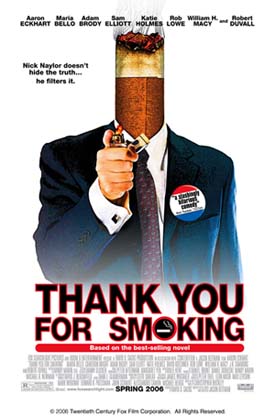 "The razor-sharp satire Thank You for Smoking is the wittiest dark comedy of the year thus far. It has appeal to all sides of the political spectrum."
-- Claudia Puig, USA Today

"The first film in a long time with a true gift of gab. Its wisecracks actually crack wise."
-- Michael Phillips, Chicago Tribune

"Both sides of the political fence will feel royally skewered. All that's lacking is a warning from the Surgeon General: This film will make you laugh till it hurts."
-- Peter Travers, Rolling Stone

"It's more fun than a turkey shoot. It's also one of the most entertaining riffs on American culture in years."
-- Jack Mathews, New York Daily News

"Thank You is a sly, smart and very funny caricature of corporate politics and image culture. Reitman... skewers the spin machine with such wicked wit that you can't help but laugh."
-- Sean Axmaker, Seattle Post-Intelligencer