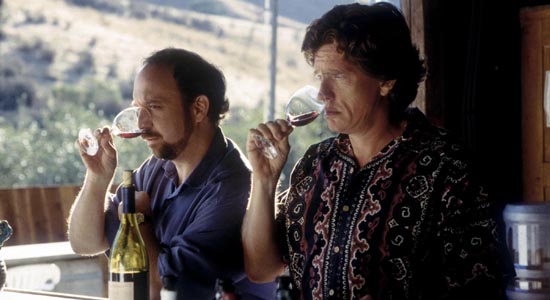 SIDEWAYS was helmed by the critically acclaimed Alexander Payne, who wrote the screenplay with his longtime screenwriting partner Jim Taylor based on the novel by Rex Pickett. Payne and Taylor won Academy Awards for "Best Adapted Screenplay" for the film and nominations for "Best Picture" and "Best Director," with a "Best Supporting Actor" nod going to Thomas Haden Church and "Best Supporting Actress" to Virginia Madsen.

A wine tasting road trip to salute Jack's (Thomas Haden Church) final days as a bachelor careens woefully sideways as he and Miles (Paul Giamatti) hit the gas en route to mid-life crises. The comically mismatched pair, who share little more than their history and a heady blend of failed potential and fading youth, soon find themselves drowning in wine and women (Sandra Oh and Virginia Madsen). Emerging from a haze of Pinot Noir, wistful yearnings and trepidation about the future, the two inevitably collide with reality.

Incredibly, the film had an impact on the wine industry at the time. Per Wikipedia:

"Throughout the film, Miles speaks fondly of the red wine varietal Pinot Noir, while denigrating Merlot. Following the film's U.S. release in October 2004, Merlot sales dropped 2% while Pinot Noir sales increased 16% in the Western United States. A similar trend occurred in British wine outlets... However, sales of Merlot in the United States remain more than double those of Pinot Noir, the country's second most popular wine."

Metacritic gave it a Metascore of 94%, signifying "universal acclaim."

SIDEWAYS also holds a rare 97% rating at Rotten Tomatoes - 201 positive reviews out of 208! Excerpts below:

"Four stars. What happens during the seven days adds up to the best human comedy of the year - comedy, because it is funny, and human, because it is surprisingly moving."
-- Roger Ebert, Chicago Sun-Times

"In Sideways, Payne has created four of the most lived-in, indelible characters in recent American movies. This deliciously bittersweet movie makes magic out of the quotidian."
-- David Ansen, Newsweek"

"It's an intoxicating feeling when a movie excites and enlivens us like this - and there's a particular giddiness to be had in thinking about what movies can (but don't often) do for one's soul after imbibing such a fine vintage."
-- Lisa Schwarzbaum, Entertainment Weekly 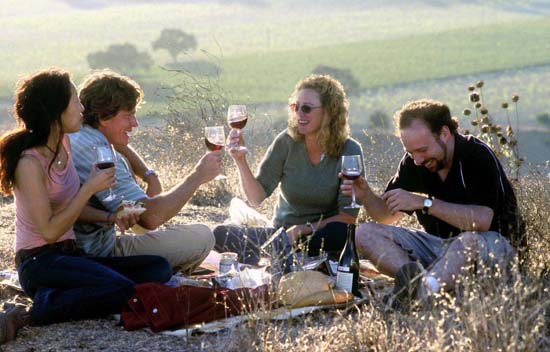